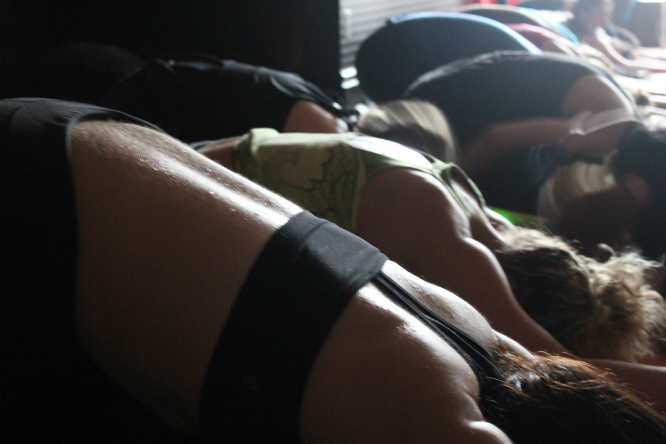 I had always thought that yoga was an exercise for “touchy-feely” people who really didn’t want to work out and get sweaty. Then I realized that everyone – and I mean EVERYONE – I know who does yoga is slender and fit. Not only that, they are deceptively strong. What the…? As I got older and a little stiffer, I noticed that my “yoga friends” weren’t stiffer. They would easily sit on the floor when there weren’t enough chairs. And, they could just as easily get up again. That’s when I first started to admit – yoga may be a great way to get fit.

The event that pushed me over the edge into dabbling in yoga was a car wreck. When my car made contact with the other car, I was standing on the brake with my right foot. Both cars were totaled, but I was uninjured, except for that leg. My knee was torqued and compressed. Needless to say, I wouldn’t be mall walking for a while.

One of my friends suggested some gentle stretches to help me get over the wreck. After the session, I felt invigorated, and eager for the next lesson. As my knee healed, I stepped up my yoga workout and, much to my surprise, found myself sweating! That’s right, it was not an aerobic exercise, but I was certainly getting a workout.

That’s when I realized that yoga was not a form of self-hypnosis. It is a legitimate exercise, and a great way to get fit! As I gently stretched my long muscles, years of tension gradually released their grip. I found muscles I never knew I had, and yes, they were sore after my non-workout. As the intricacy of the exercises increases, so did my need to focus, concentrating on maintaining balance and proper form. This provided another benefit in that, for a short time every day, I wasn’t worried about anything. It was just me and my body.

I also found that my feet and ankles didn’t swell like they used to. My friends said that this was due to the fact that my circulation was improving. Who knew? I began to notice that I wasn’t having as many migraines, either. This was partly due to the fact that my neck, shoulders, and back were stretched and more relaxed. It was also aided by the improved circulation.
Needless to say, I’m now hooked on yoga. The low impact exercises are easier on my joints, while still isolating muscle groups for strength and stretching. In addition, the balance I have achieved has served me well on several occasions. At an age where people start to worry about falling and breaking a hip, I’m in better shape than ever. I’m calmer, too, able to center my focus and concentrate on the task at hand, rather than being distracted by a million things at once. So, if you ask me today, I’ll say yes, yoga is a great way to get fit.

How To Lose Fat Without Losing Muscle
Scroll to top