Our Blog
You are here: Home1 / Our Blog2 / Beauty & Skin Care3 / The Sweet (Aftershave) Smell of Success

There are many ways to turn off a woman, but there are few as good as a man who wears aftershave like a chemical factory on a meltdown. Some men do not realise when they are wilting flowers as they walk past because they have burnt any smell receptors in their nose with regular applications of their favorite paint stripper. Well things are not as bad as that any more but, men of a certain type are known for being unable to draw the line at wearing enough aftershave to impress. Instead, some men (I’m told) like to drown themselves in aftershave, ‘just in case it wears off’. To all fellow men with good intentions – no need! Read on, don’t just follow your nose.

More researched products have come on line to the benefit of mens skin and the noses of women. Furthermore, things have changed so much in recent years and we have moved away from the strong alcohol based aftershaves that used to be all that was available for men. Now we have names like CK ‘Contradiction’, Dolce and Gabbana ‘The One’ or Aramis aftershave that all have a great pedigree in the luxury fragrance market. A good aftershave is made with expensive ingredients, which is why they are more expensive than cheap chemical alternatives. The difference in price is more than noticeable to anyone with a sense of smell.

Men’s Magazines are a Major Influence

There have always been men’s magazines around for the discerning gentleman, but Gentleman’s Quarterly (GQ) is now competing with a shelf full of men’s magazines all touting their opinion on something. Style is a regular feature in any half-decent publication and men’s aftershaves are covered regularly. Years ago, we would not have been able to read more than two features per year about aftershaves, but now we have whole sections of department stores stocking products for men. The popularity of certain aftershaves has a lot to do with the way we perceive the wearers of these products. There is no doubt that stylish ads and lifestyle references associated with the better men’s aftershaves have helped to make the men’s fragrance market more appealing. 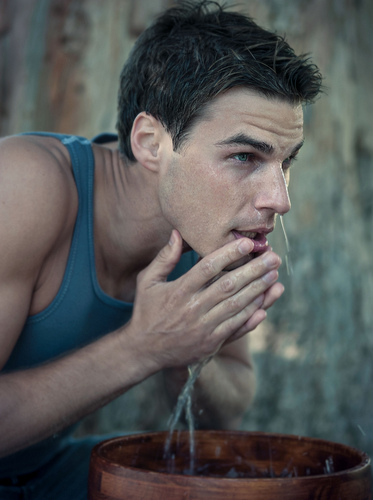 Anyone around in the eighties would remember the Old Spice Adverts with a man, surfing a tube while Carl Orff’s ‘Oh Fortuna’ played as background music.  The adverts were a vision of power with which any man would love to be associated. The theme continues today although not with Old Spice. Davidoff Cool Water and Cool Water Game are advertised with a wave tube as a background. The powerful picture may not have a surfer exiting the tube but the similarities are astounding.

The move from chemical giant to the metrosexual man has been helped by a of number famous faces fronting the products. David Beckham has his own line with Beckham Signature apparently more marketable than his wife’s bottle by the same name. There are also the rappers from the U.S. bottling their own products; with names like Usher and P.Diddy (Sean John), there are role models from all walks of life getting in on the game. The problem many people have is what is best for them?

The only way to know if something is right for you is to wear it and judge the reactions. Then when someone says “You smell nice, what are you wearing”, assess how you feel when you respond with “Kylie Minogue’s ‘Sweet Darling’”. If you think you can pull it off it could be worth a go, but just don’t expect too much with the wrong answer. A response that sounds like it came from a perfumery rather than a hardware store is always going to impress people with fully functioning nasal passages more.

Whichever mens aftershave you choose, just remember to use it sparingly and not too liberally.

Will Obamacare Affect Your Prescriptions?
Scroll to top